Tropes vs Women is a series published by Feminist Frequency on their web site and on YouTube.[1]

As Tropes vs Women has not of high significance to Game Gate it we be some time before it is written up. There is no Wikipedia article, don't bother looking.

Tropes vs Women in Video Games

Tropes vs Women in Video Games is a series of 5 videos (later changed to 12 following achievement of stretch goals) produced by Feminist Frequency with the intention of "...[exploring], [analyzing] and [deconstructing] some of the most common tropes and stereotypes of female characters in games" due to Sarkeesian's disappointment with "...the limited and limiting ways women are represented [in video games]." The series is intended to broadly analyze recurring trends and themes common in the gaming industry rather than focusing on specific "offenders", and will eventually discuss 12 different topics: [2]

Anita Sarkeesian's video for her Kickstarter campaign has been controversial in her legitimacy as a self-identified gamer. On March 20, 2014, a video was released on Anita presenting on the subject "Women and Pop Culture" at Santa Monica College on July 12, 2010. In the video, she explains to her audience that she is not a gamer nor is she a fan of video games. [3] In her Kickstarter video, she explains and illustrates that she is a gamer. Other signs from the Kickstarter video that made viewers question the legitimacy of her status as a gamer include her inability to show viewers what game she is playing, and holding the Xbox 360 controller while it was off. [4] [5]

Despite the Tropes vs Women in Video Games Kickstarter being successfully funded years ago, Feminist Frequency has been slow to release videos, that were originally planned over the 2 and a half (as of this writing) years since the Kickstarter was successfully funded, with said videos covering only 3 of the 12 originally planned topics. [6] The videos themselves also differ very little in both format and structure from the videos that were being produced prior to her successful Kickstarter, and notably do not require any sort of advanced special effects or editing technology, as the videos consist mainly of Sarkeesian talking in front of a blue screen with game play footage spliced in where needed.[cn] There have been reports of harassment being received.[7] 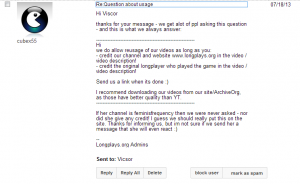 Once the videos were released, several people who followed the Let's Play community on youtube discovered that the video clips used throughout the series were ones pulled from some of their favorite Let's Plays without express permission having been obtained. The majority of the videos used at the time were taken from from Longplays by Youtube user Cubex55. This was detailed in a post on the Vicsor's Opinion blog. [8]

The most egregious example of this is located in Part 1 of her "Women as Background Decoration", in which she characterizes the game Hitman Absolution as encouraging the player to kill and desecrate the bodies of female strippers, while neglecting to mention that any killing of non-target NPCs is penalized heavily in-game and that doing so actually impedes the player's progress. In the same series, she also deliberately mischaracterizes a mission in the game Watch_Dogs set in a strip club, neglecting to mention that the player's goal in that mission is to break up an illegal prostitution ring. [9] [10]

A significant amount of information is in these articles.