The Fine Young Capitalists, often abbreviated TFYC, is a feminist production support company which provides resources and opportunities in media production for under-represented demographics.[1] Their guiding principle is to prove that women have marketable ideas by encouraging people to invest in them, with profits going to charity.[2] Their relevance to GamerGate lies in their interaction with Zoe Quinn where the project was almost destroyed, and their struggles to get their story told due to the biased games media.

Their most recent project was concerning women video game developers. The first phase was an open call to all people who identified as women to write a 1,500 word game idea pitch. The pitches were judged by a panel of experts chosen by TFYC on the basis of financial viability, originality, immersion or fun, presentation, and, most importantly, feasibility to be produced in 6 months on a roughly $50,000 budget.[3][4] Once the judges selected the top five entries, internet voting began to determine the overall winner, while a crowdfunding campaign started. Once the crowdfunding and voting was complete, the game would be produced by Autobotika studios using the crowdfunding money. The winner will get 8% of the total profits, with 10% going to Autobotika, 8.2% going to TFYC for future projects, and 73.8% going charities selected by the donators.[5]

On 28 February 2014, shortly before beginning to collect pitches, Zoe Quinn became aware of the project. She misunderstood the idea and believed that the women were being asked to work for free for six months.[6][7][8] She also believed that their policy regarding transgender people was intolerant in terms of trying to police when you qualified as a woman.[9] Unsatisfied with the answers she got, and upon realizing the traffic generated to their website had caused it to crash, she and Maya Kramer celebrated "killing an exploitative startup's website."[10][11][12]

Motivated by Quinn and Kramer's discussion, former Destructoid writer Jonathan Ross found Facebook posts from one of TFYC's partners and tweeted them publicly.[13] The person in question did not appear in any public information because he preferred to remain a silent partner.[14] Kramer retweeted one of Ross's tweets,[15] and because of TFYC's inexperience with Twitter, they believed that Maya herself had doxxed them.[16] He held Quinn partially accountable because he (incorrectly) believed Kramer was Quinn's PR agent, and because Quinn retweeted or replied to a tweet containing his information, spreading it to her followers.[17]

Due to the controversy that followed their interaction with Quinn, the project was dealt a serious blow. Due to concerns over being accused of being transphobic, one partner left, losing TFYC $10,000.[18] Their reputation was severely damaged and the accusations of transphobia and exploitation followed them everywhere, often leading to social media discussions being shut down.[19] Journalists too, believing the accusations levied against TFYC, refused to cover them. Regardless, they began collecting pitches on 10 March 2014, which continued until 14 April.[20][21] The five winners of the first phase were announced two weeks later on 29 April.[22]

Determined to get coverage, TFYC continued contacting press, and eventually got a response from an IndieStatik reporter, Chloi Rad, who liked the project and conducted an interview with them, with the intention of publishing the article after GDC 2014, which was held in mid-March, following an opportunity to get Quinn's comment on the situtaion.[23] Rad then went silent for a week, so TFYC posted a sketch of her on an AMA posted on reddit on 24 March, in order to get her attention.[24] [25] TFYC successfully got Rad's attention, but not in the manner they were hoping for. Rad demanded they remove her name and image from the AMA, claiming that upon talking with Quinn she agreed the project was exploitative and transphobic, even though all the issues Quinn had with the project were addressed in the interview.[26]

Rad would later state that the reason she didn't write the article was because she wasn't 100% clear on the story and considered it to be based in rumor.[27] Rad's sentiment was repeated by other journalists, and fearing the project would fail, TFYC attempted to contact Quinn and Maya in early August to address her issues with the project, and even offered Quinn a paid consultation position, but they received no reply.[28][29] Failing in all their efforts to get coverage, they launched the crowdfunding campaign and voting portions of the production on 12 August[30][31] 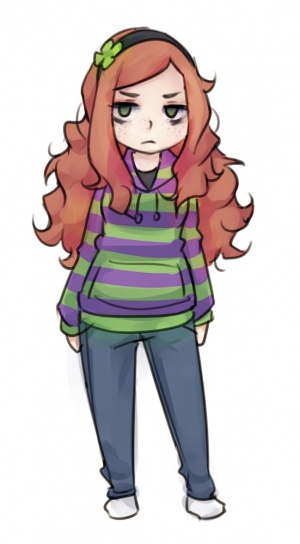 The publication of thezoepost on 16 August 2014, and the resulting controversy, would get TFYC's project the attention it was sorely needing. On 17 August, in a reddit thread about the Wizardchan harassment, a TFYC representative posted about what happened to the production.[32] The post was then featured Internet Aristocrat's videos, and consequently spread all over the internet.[33] The video games board at 4chan, /v/, found out about the project and enthusiastically supported it.

Starting on 19 August, /v/ was the top contributor to TFYC's IndieGoGo campaign.[34][35][36] They requested a referral link and specified that their portion of the profits should go to the Colon Cancer Alliance to "chemo butthurt," that is to say, cure bad blood.[37] Amidst cynical accusations that they were only donating to spite Quinn and feminists in general, /v/ continued donating, raising $5,000 in just one day.[38][39] They raised enough money that they were given the opportunity to have a character of their design added to the winning game, a design which wound up being Vivian James.[40]

The support from /v/ was heavily criticized by people already critical of the project. They claimed that 4chan was one of the most misogynist places on the web and a feminist production accepting money from them was being hypocritical. TFYC responded by saying any claims that 4chan can't take part in a feminist project because of who they are is oppressive, and there are far more important social justice issues to tackle than stopping 4chan from donating to the Colon Cancer Alliance.[41]

Vivian James too was criticized heavily. On 28 August, Vice ran an article in which they claimed Vivian was created to spite feminists.[42] Dismayed by this hit piece, TFYC posted a response in their blog, where they asserted Vivian James was precisely the type of non-idealized female character that should be encouraged, and wondered what type of feminism "would sacrifice one of its own for the advantages of another.[43] 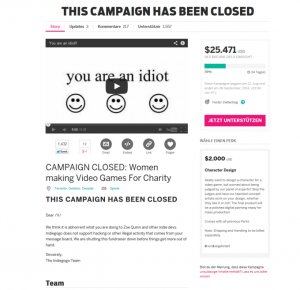 On 24 August, TFYC's IndieGoGo page was hacked, probably through guessing their insecure 8-character password. Their page was defaced and the message left indicates it was an attack by opponents of GamerGate as retaliation for harassment Quinn and other indie devs had faced.[44] In response to the hacking, and as a show of good faith to Quinn, TFYC recommended donating the profits from Vivian t-shirt sales to iFred, a charity Quinn had supported previously.[45] The plan was shot down by /v/ and in addition to redesigning the t-shirt, it was announced the profits would instead go to Colon Cancer Alliance.[46]

Due to the hack, Kotaku writer Jason Schreier contacted TFYC and asked about their project and the hacking, but no article was ever published.[47] Later, Shreier said the reason he didn't publish the article was due to ethical concerns stemming from the fact that it involved a woman with whom one of their writers had a relationship.[48][49] After having a discussion with IndieGoGO staff, the campaign was restored the on 25 August with no loss of progress.[50]

Due to the publicity the TFYC had recently received, which in turn spread their accusations against Quinn even farther, Quinn contacted TFYC on 27 August.[51] She was concerned that in their reddit post, which was getting a large amount of attention, TFYC incorrectly stated that Quinn doxxed them, and made the DDoS of their website seem intentional and malicious. Over the next week they exchanged a number of emails attempting to craft a statement that TFYC would publish to declare that they had reached an understanding. They also talked on the phone, where they discussed the possibility of publicizing their accord at PAX Prime 2014, which was held from 29 August to 1 September and at which Quinn was scheduled to speak.[52][53][54]

Quinn struggled with wording that implicated her in what happened, but TFYC were unwilling to alter it significantly because she was a significant participant in the what happened and they believed her partial admission of fault was needed to repair their image.[55] In the end they agreed to a wording for the peace treaty and it was published on TFYC blog on 29 August.[56][57] They also edited their reddit comment and replaced with with an audio recording less focused on blaming Quinn.[58]

Shortly after the publication of the peace treaty, on 5 September, TFYC posted a small excerpt of their email conversation with Quinn on twitter as evidence that Maya had doxxed them.[59] Quinn felt that TFYC had used their emails to attack a woman and stopped talking to them.[60] This sudden falling out after TFYC had helped her get funding for her Rebel Jam left them feeling used, so they took down the peace treaty and redirected the URL to a more harshly worded statement published on 3 September.[54][61]

Despite all the obstacles put in their way, TFYC reached their $65,000 IndieGoGo goal on 11 September 2014, but would continue until 26 September.[62][63] 4chan and 8chan easily secured top contributor with a combined $25,806 in donations. In addition, reddit, without using a referral link, donated enough that they were able to have a character designed as well.[64] Voting on the winner was closed on 21 September. The winner was Afterlife Empire, created by Danielle M.[65]

To celebrate the project's success, TFYC announced the sale of Vivian James t-shirts with proceeds benefiting the American Foundation For Suicide Prevention, as well as the final design of reddit's character, Gilda Mars.[66][67] Danielle M decided to continue working with TFYC and Autobotika studios to have her game produced. There she will lead a team to develop her game, including a woman director, producer, and programmer.[68] TFYC is already in early planning stages of their next project, a televised game jam.[69]