From GamerGate Wiki
(Redirected from Operation Save Vivian James)
Jump to: navigation, search 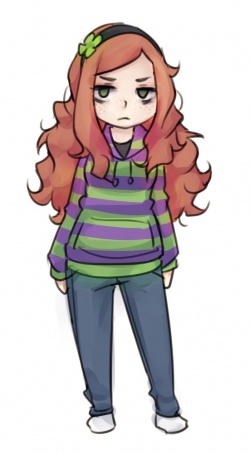 Vivian James, as she was submitted to TFYC.

Vivian James is a character created by the 4chan boards /v/ and /pol/[1] for use in The Fine Young Capitalists' gamejam.[2] When 4chan unlocked the donator benefit allowing them to add a character to TFYC's planned game, /v/ and /pol/ used the opportunity to design a character themselves. In order to deflect accusations of misogyny, the character was deliberately made an average-looking teenage girl. Vivian James has since become the de facto mascot of the GamerGate consumer revolt, and has had numerous pieces of fanart and fan fiction written about her. Most of her physical features, including her clothing and hair length, as well as most aspects of her personality, were created via polls on /v/, and as a result Vivian is often referred to as "/v/'s "daughter".

What could be said to be Vivian James's first character design appeared on 8/22/2014 on 4chan's /v/ board in response to a thread about designing a character to submit to The Fine Young Capitalists. After an extended process spanning multiple threads and dozens of different strawpolls, a consensus was reached about her design and basic personality. Thus, Vivian James was born.

The threads describing Vivian were documented in the linked image.

Vivian James' visual design represents 4chan's /v/ board, and contains some references to the board's inside jokes. Vivian is typically depicted as wearing a striped green and purple hoodie with a black t-shirt underneath, blue jeans, and white sneakers. She has long auburn or red hair, green eyes, and freckles, with her eyes often depicted as having bags underneath them due to her inconsistent sleep schedule. Her skin is a pale white due to the large amount of time she spends indoors, and she is typically depicted as being of average or slightly above average weight. She also wears a headband featuring a clover pin, a reference to 4chan's logo. After the sudden upheaval of users to 8chan after 4chan's GamerGate censorship controversy, many of Vivian's fanart designs began featuring a green double-loop, in reference to 8chan's infinity symbol (∞). Because of this, both the clover and the infinity headbands will be a customizeable option in Afterlife Empire.[3]

Most aspects of Vivian's personality are intentionally left somewhat ambiguous, allowing her to become a "blank slate" for the viewer. In general, she portrayed as apathetic, cynical, and somewhat lazy, traits which are intended to reflect the personality of the "average" /v/-goer. Vivian is apathetic towards any issue that is not directly related to video games, and she is typically portrayed as spending most of her time either playing video games or browsing the internet.

Like her personality, Vivian's backstory is left intentionally ambiguous. She is generally portrayed as being the daughter of the existing board-tan of /v/, with an anthropomorphized version of /pol/ usually being portrayed as her uncle.

Following the creation of Vivian James and the cooperation between 4chan and TFYC, The Fine Young Capitalists received negative feedback on both Twitter[4] and Tumblr[5] from certain feminist groups and supporters, claiming TFYC to be hypocrites, for dealing with 4chan in a friendly manner and accepting their "dirty money".[6]

In response to the accusations, The Fine Young Capitalists defended their stance regarding 4chan,[7] claiming that by stopping them from taking part in the project, they would have to oppress 4chan and that they didn’t wish to do that.[8]

Many have accused Vivian James of being antifeminist or sexist in nature, with Tom Mendelsohn writing in the Independent that "She’s a sardonic dream woman who games in slouchy hoodies, has long, lascivious tresses of red hair and doesn’t ever want to hurt them – and who, tellingly, doesn’t actually exist."[9] Likewise, Allegra Ringo of Vice wrote that Vivian was "born of intolerance" and that she is "a character masquerading as a feminist icon for the express purpose of spiting feminists".[10] However, this view of Vivian is inaccurate - her personality, as noted above, completely contrasts with this view of her as a "dream girl", as she is not conventionally attractive and is bitter, cynical, and entirely uninterested in romantic relationships. Furthermore, most of /v/ views Vivian as their "daughter", which further contradicts with the view of her as a "dream girl".[citation needed]

It was posted on the subreddit Kotaku In Action.

"Google's description of Vivian James is taken from a biased source, Vice, who is ideologically opposed to Gamergate."[11]

The objective of the operation was to have Google change its 'infocard' to reflect a less malicious characterization of her provenance. This would be achieved by using the Google.com feedback feature. Among the feedback operation participants were recommended to be give was to change the source of information to someone less maligned than Vice. Know Your Meme was considered by some to be an acceptable source, and was encouraged to be included as a recommendation to Google when sending feedback.[12]

As of the 19th of September, 2019, Google has no "infocard" specifically for Vivian James. The top result is the relevant Know Your Meme article. Some users have the results accompanied by the Fine Young Capitalists "infocard" to the right margin. This article is the fourth search result.[13]

On August 24, the TFYC campaign page on Indiegogo appeared to have been closed and was subsequently removed.[14] It was rumored that the page got hacked and was edited to look as if it were taken down by Indiegogo. The Fine Young Capitalists subsequently shared this message on their Tumblr account,[15] and said that they would try to get the project repaired with the help of Indiegogo. The funding page was repaired that same day, but it took another day for it to be back up completely.