Lillian Woods is Vivian James' cousin and rival, her name is a pun based on "Literally Who." She represents SJW and the radical feminists. Other nicknames: Feminista Wines. 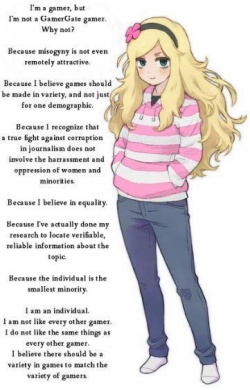 Lillian Woods has an almost identical resemblance to Vivian James. However, she has blonde hair, blue eyes, wears a pink and white stripe hoodie with a matching pink hair pin.

Lillian Woods was designed by Nightwulfe1 [1] as GamerGhazi's "improved" answer to Vivian James. She was quickly abandoned after Gamergate pointed out that Lillian was just a recolor with an Aryan twist. The irony to all of this was due to the #NotYourShield movement which shows how Gamergate is way more diverse than Anti-Gamergate affluent males who were insisting that they were fighting Gamergate for the defence of the poor, oppressed minorities. [2]

Lillian Woods was adopted, after Anti-Gamergators dropped her. She is used as a hyperbolic strawman -Er, strawwomyn, who is opposed to everything Gamergate is and stands for. Constantly accuses both Vivian and Gamergate (sometimes Not Your Shield) of being liars, hateful, racist, misogynist, transphobic, priviledged, evil, having internalized hatred, a pitifully tiny minority AND a toxic majority whose time has ended...All while maintaining an air of smug moral superiority.

Lillian continues to hang and play video games with Vivian, despite being bad at them (She blames the patriarchy and oppression for this).