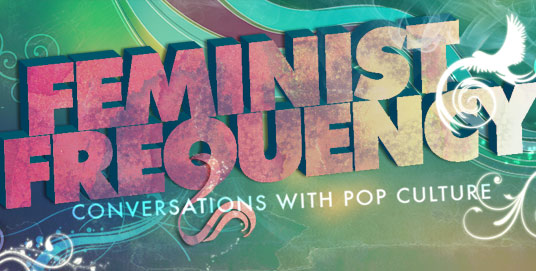 
Feminist Frequency is an ongoing webseries of video commentaries that claims to explore representations of women in pop culture media. The video series was created by Anita Sarkeesian in 2009, and episodes for the series are created alongside her producer and co-writer Jonathan McIntosh. In recent years, despite the community voicing numerous concerns, from questionable content to the outright plagiarism of Let's Play content found on YouTube, the Games Media such as Kotaku and Polygon promote the series while ignoring any criticisms made of the series. Feminist Frequency became involved in GamerGate when several of the threats she received was attributed to the revolt, which led to a New York Times article as well as an appearance on the Colbert Report. Feminist Frequency is both a registered business and charity.

Jennifer Jenson - Treasurer - Teaches at York University, was Anita's grad school supervisor[1] Was an organizer of the DiGRA 2005 Vancouver event, and has written 6 articles for them.[2][3][4] Also the Co-founder and President of the Canadian Games Studies Association.[5]

Both Anita Sarkeesian and Jonathan McIntosh consult for Silverstring Media.[6]

This prompted an undisclosed conflict-of-interest on the Feminist Frequency Steam Curator page, as they recommended Crypt of the NecroDancer, a game who had contracted out SilverString for narrative design, without disclosing the Silverstring Media connection.[7][8][9]

Feminist Frequency has come under fire by many for alleged misuse of the Tropes vs Women in Video Games Kickstarter funds following its successful funding. The Kickstarter raised over 16 times the amount of money it originally requested, but progress on the series itself has been slow, with only one quarter of the planned topics having been covered to date. Criticism FemFreq's lack of financial transparency only grew after it was revealed that the organization was only officially registered as a charity in the State of California in May 2014, 2 years after the Kickstarter began,[10] raising questions over how donations made prior to this date were used. In January 2015, FemFreq released a financial breakdown of the Kickstarter and subsequent earnings.[11] This financial breakdown reveals that they raised over $440,000 in 2014, with $230,000 having been raised in December alone.[12] However, FemFreq only spent $64,200 in expenditures in 2014, most likely because most of the 2014 donations were made at the end of the financial year. This sudden uptick in donation volume can likely be attributed to Sarkeesian's increased media presence following the start of the GamerGate consumer revolt.

Tropes vs Women in Video Games is a series of 5 videos (later changed to 12 following achievement of stretch goals) produced by Feminist Frequency with the intention of "...[exploring], [analyzing] and [deconstructing] some of the most common tropes and stereotypes of female characters in games" due to Sarkeesian's disappointment with "...the limited and limiting ways women are represented [in video games]." The series is intended to broadly analyze recurring trends and themes common in the gaming industry rather than focusing on specific "offenders", and will eventually discuss 12 different topics:[13]

Despite the Tropes vs Women in Video Games Kickstarter being successfully funded over 2 years ago, Feminist Frequency has only released 6 out of the 12 videos that were originally planned over the 2 and a half (as of this writing) years since the Kickstarter was successfully funded, with said videos covering only 3 of the 12 originally planned topics.[14] The videos themselves also differ very little in both format and structure from the videos that were being produced prior to her successful Kickstarter, and notably do not require any sort of advanced special effects or editing technology, as the videos consist mainly of Sarkeesian talking in front of a blue screen with game play footage spliced in where needed. 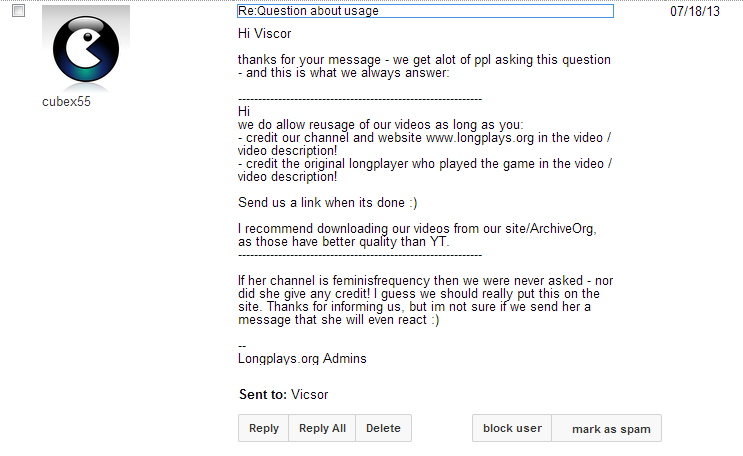 Once the videos were released, several people who followed the Let's Play community on youtube discovered that the video clips used throughout the series were ones pulled from some of their favorite Let's Plays without express permission having been obtained. The majority of the videos used at the time were taken from from Longplays by Youtube user Cubex55. This was detailed in a post on the Vicsor's Opinion blog.[15]

The most egregious example of this is located in Part 1 of her "Women as Background Decoration", in which she characterizes the game Hitman Absolution as encouraging the player to kill and desecrate the bodies of female strippers, while neglecting to mention that any killing of non-target NPCs is penalized heavily in-game and that doing so actually impedes the player's progress. In the same series, she also deliberately mischaracterizes a mission in the game Watch_Dogs set in a strip club, neglecting to mention that the player's goal in that mission is to break up an illegal prostitution ring.[16][17]

In February of 2015, it was revealed that Anti-Defamation League tries to push Feminist Frequency anti-gaming course material into Common Core (a set of standards that is taught in schools in the United States).[18]