#NotYourShield is a Twitter hashtag related to, though not fully aligned with, GamerGate. It has many different meanings to many different people, but one of its primary focuses is to highlight the diversity of gaming and of "Gamers". It also stands to be a symbol that corrupt journalists, media companies and bloggers are 'not your shield' from criticism.

The name of the hashtag comes from the belief that gaming journalists are trying to use their supposed support for minorities in gaming as a shield against criticism. Since it was created, it has gathered approximately 622,000 tweets as of February 2015.[1] 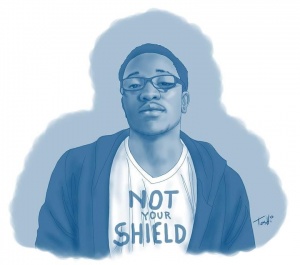 #NotYourShield was started by an anonymous 4chan user on September 3, 2014, responding to a call to organize on a #GamerGate thread on /v/.[2] Contrary to what detractors of GamerGate may believe, the thread in question shows that this tag wasn't manufactured by supporters of the consumer revolt in order to use women and minorities as a shield. Neither does it indicate that sockpuppets are to be used.[3]

The 4chan post was likely created by Polar Roller, or @j_millerworks on Twitter, who later stated he had originated it on /v/.[4] Polar Roller is also known for having been fired from his place of work due to his involvement in GamerGate.[5] 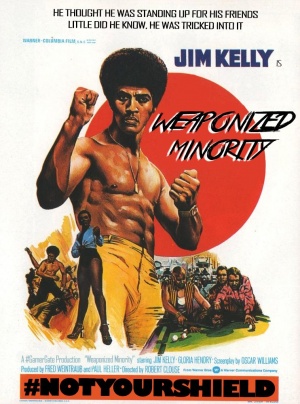 The #NotYourShield tag has gone on to be a point of contention for some people, such as Matt Lees,[8] calling the tag a form of "weaponized minority". Many people decry the idea of weaponized minorities, citing the fact that thinking minorities are gullible/stupid enough to be tricked into something is racism in and of itself.[9] The concept of "weaponizing minorities" has been parodied by #NYS and #GG supporters.

Another common reaction to the #NotYourShield tag is to call the people behind the tag "sockpuppets", a term for someone running an alternate, or fake, account in an effort to deceive others by garnering fake support or opposition of a topic. People who have used the #NYS tag have often responded with additional photos and datestamps indicating when the photos were taken,[10] proving their identities.

Some critics of #GamerGate, including Dan Olsen,[11] have accused #NotYourShield of being an attempt to deflect criticism by using the hashtag's participants as a shield. The primary purpose of #NotYourShield is to allow minorities and women who support #GamerGate to speak out in favor of the movement and to criticize those who use them as a shield to deflect criticism.

Girls of #GamerGate is a Google Hangout started by QueenyMartha

, where a group of lady GamerGate and #NotYourShield supporters discuss topics surrounding GamerGate. As of writing, there have been five streams under the "Girls of #GamerGate" moniker.

The Women of #GamerGate

The Women of #GamerGate was started by NotYourShield

, and is a Google Hangout that offers the chance for the women that support #GamerGate to give an account of their experiences.

Started by NotYourShield, this a stream for LGBT supporters of #GamerGate to share their experience and talk to other supporters.

Also started by NotYourShield, it is a Google Hangout stream for ethnic persons and people of color who support #GamerGate to promote more diversity in the gaming community.

A People's History of Gamergate