From GamerGate Wiki
(Redirected from Gamers are Dead)
Jump to: navigation, search 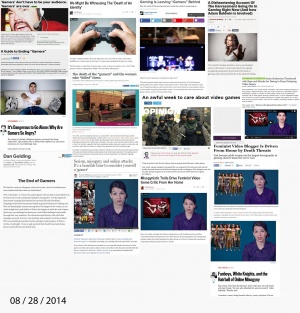 Gamers Are Dead is the name given to a collection of articles critical of gamers. These articles were published within the same time period from August 28, 2014 through early September. Each of these articles echoed a narrative; that the "gamer" identity or culture was dead. These articles heavily implied the "gamer" identity had been killed by sexism and misogyny. The articles which inspired the most backlash were from gaming websites themselves for their implication of a dismissive attitude towards these publications' primary audience. It is suspected by many that, due to the timing of these articles, both in the quick succession of which they were released and in the midst of an unresolved scandal, the articles were an act of collusion. Their impact caused the Gamer Gate consumer revolt to become much larger and more determined in its effort to expose impropriety in gaming journalism.

On 28 August 2014, the day after the creation of the Gamer Gate hashtag, numerous writers most of whom writing for game and tech websites published articles which all carried the same basic message and tone. Four days later on 1 September 2014, Rock Paper Shotgun published their own article matching the tone and content of the other nine. Gamers almost immediately suspected that the simultaneous release of these articles was not a coincidence and that there was hidden collusion taking place. At the time it was believed that it was coordination done through the PR firm Silverstring Media. However, upon the revelation of the GameJournoPros group, it became widely accepted that the mailing list was responsible for the coordination.

Many gamers were outraged, not only because these publications declared their identity and culture dead, but because they had done so in such an obviously coordinated way. Before this point it was thought that impropriety in video game journalism was confined to isolated incidents of unethical behavior by individuals. However, this incident showed that not only were nearly all major game journalism outlets involved in such unethical behavior, they were also actively coordinating their narrative. This caused GamerGate supporters to redouble their efforts in exposing corruption and pursuing reform in video game journalism. Every participant in the Gamers are Dead effort has been boycotted by GamerGate supporters, and so far none of them have issued any retractions.

This event is perceived by many gamers as a tangible indication that the gaming media has made a definitive paradigm shift away from reporting on behalf of the consumer, and instead focusing on a biased cultural critique of video games and the people who consume them. Consistent tendencies to inject reviews of games with a monotonous political perspective, and skew scores based on a game's compatibility with that perspective, had long roused cynicism from gamers who were dissatisfied with a lack of objective information they were getting about the games in which they were interested. Given the one-sidedness, occasional vitriol, vagueness, and condescension with which gaming journalism had become synonymous, many gamers ultimately developed a distaste for the practice of politicizing game reviews and began denouncing many prominent gaming sites which partake in it.

Several gaming blogs had insisted that their postmodern political analysis was not bringing imbalance to their reporting, and that the social projections they perceive from video games are undeniably consequential to all gamers and thus imperative to observe; and that measures to ensure objectivity in such observations were unnecessary.

The Gamers are Dead articles epitomized these rising tensions, and reflect a sense of hostility from game critics towards an uncooperative demographic which they feel is holding back their sense of progress for gaming as a medium. Many view the articles as an authoritative scolding of the free market, in which games are developed to appeal to as large and generic a consumer base as possible, as opposed to actively catering to fractionally narrow demographics as stipulated by modern progressiveness. By marginalizing the sensibilities of this agenda, gamers are often ostracized in editorials as being bigoted and repressive, accused of using the status quo as an excuse to be politically incorrect. Gamers' rejection of this narrative has been a recurring point of contention throughout GamerGate.

In August 2014 the Gates Foundation gave WestEd a grant of $3,457,786 "to provide support for teacher practice networks nationally, and with a focus in California."[1] Users of 8chan claimed that the grant was delivered one day before the Gamers are Dead articles, and the page had changed to remove this information before it could be archived. A review of exchange rates on August 26 and 27[2] finds that this amount comes close to even values in a few currencies.