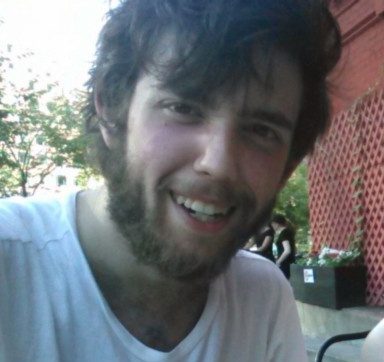 
Eron Gjoni is the author of The Zoe Post, a six-part blog post revealing the infidelity and emotional abuse of his ex-girlfriend, independent game developer Zoe Quinn. Gjoni's "The Zoe Post" was arguably the catalyst of GamerGate due to the exposure of cronyism and journalistic conflicts of interest resulting from Zoe Quinn's affairs with several figures of the game industry.

On August 16, 2014, Eron Gjoni published a blog that revealed the manipulative nature of his ex-girlfriend, indie game dev Zoe Quinn. Titled The Zoe Post, the blog outlined the numerous accounts of Quinn's infidelity, manipulation, and emotional abuse against Gjoni over the course of their relationship. Gjoni's intent for The Zoe Post was to warn others of Quinn's toxic personality and her methods of manipulation in order to prevent others from experiencing what he had gone through.

I believe that to stay quiet about someone who will hurt others is to be complicit in perpetuating the harm they will cause.[1]

The Zoe Post was split into six main parts and was supplemented by screenshots of online exchanges between Gjoni and Quinn near the termination of their relationship. Originally it was posted on the Something Awful and Penny Arcade forums but the posts were swiftly deleted on both. The Zoe Post was later published on a public Wordpress account in response to the forums' deletions of the threads. Shortly after the creation of the Wordpress blog, it was discovered and spread by anonymous members of 4Chan's video game board.[2]

The nature of the blog's contents, the inclusion of the named gaming figures that were involved with Quinn, and suspicions of cronyism and conflicts of interest in gaming journalism and indie gaming fueled discussion among gamers and caused the post's contents to spread from 4Chan's video game board to other video game forums and Twitter. The controversy that stemmed from The Zoe Post developed into the Zoe Quinn Scandal, which eventually turned into GamerGate.

On September 23, 2014, Gjoni requested financial assistance for unspecified legal fees on GoFundMe.[3] The nature of the legal fees were not revealed, but many assumed were due to a SLAPP (a strategic lawsuit against public participation) from Quinn (this was later all but confirmed by Gjoni).[4] The GoFundMe was taken down for an unnamed ToS violation shortly after meeting its goal, but Gjoni was able to get most of the donations and met the rest of his monetary goal through additional donations through PayPal.[5][6]

The question of Gjoni's need for legal fees was not answered until October 2, 2014, when a user from /r/kotakuinaction attended Gjoni's court case and revealed that a 209a restraining order was invoked by Quinn against Gjoni, effectively restricting him from commenting at all on the subject of Zoe Quinn—including the court case itself. The restraining order would last into 2015.[7] In response to this apparent violation of first amendment rights, several lawyers (including Mike Cernovich) took an interest in the case and have offered Gjoni legal advice.[8]

On January 11, 2015, several court documents of the case were leaked by The Ralph Retort, including three police reports against Gjoni, the court affidavit, and transcripts of the first and second hearings.[9] The source of the document leak was not revealed, and Gjoni denied any involvement and condemned the leaks.[10]

Due to the gag order against Gjoni, further engagement with #GamerGate has been limited.