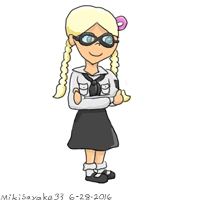 Erika Polina is the daughter of /pol/-tan and Vivian James's cousin. She has other sisters, Rachel Purity, Christ-chan, and Ebola-chan, but they have little to no presence in Gamergate, preferring to stay in 8chan. [1]

Polina (who is later renamed Erika) was originally a recolor of Lillian Woods, exaggerating her Aryan/ Nazi features. Erika took life on her own and is now the model fraulein in a white uniform top and black skirt, glasses befitting her education, and Iron Cross hair pin. She is always composed and dignified, dutifully assisting her father in resisting the world's "degeneracy."

While not a gamer like her Cousin Vivian and Uncle /v/, Erika believes video games (anime and My Little Pony, by extension) are tools of the Zionist conspiracy to transform white people into awkward, anti-social, sexless loners, thus lowering birth rates of the Nordic races to facilitate their downfall. Erika is more than happy to assist Vivian and her friends in exposing corrupt journalism...Though for wholly different reasons.

/Pol/ is her father.

Polina befriended Tay Tweets sometime in late March and it was a match made in heaven.